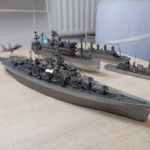 Suggestion: Separating skins (cosmetic-only) from camos (which give bonus)

By tamagotchi, April 23, 2018 in General Discussion