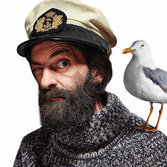 Excessive draw on Graphics card when in port.