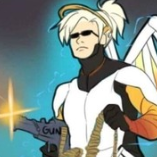 In some cases when I'm playing CV I get reported for apparently no reason and I lose two karma points. Does this happen only when teammates report you, or also when an enemy player reports you? If the latter is the case I think that's not really fair

10 answers to this question