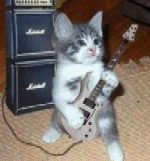 As you can see on the replay, the bots from the beginning went crazy. Mahan & Shchors were moving backwards. The second wave from the left lost orientation and on top of that the 3 BBs became 5 including an Amagi.