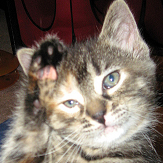 Dunkerque no crosses on turrets?

By SteDorff, July 26 in General Discussion