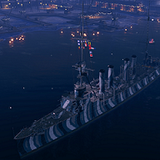 Legendary modules: when in the premium store?