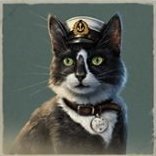 Hey Devs, how about some crew on the ships while in port?

By Sir_Sinksalot, October 7, 2019 in General Discussion