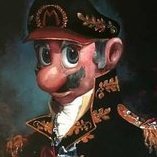 cv What about a premium CV - let's say Ark Royal?