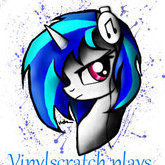 My Thoughts playing with the hotfix

By Vinyl_ScratchPlays, February 7, 2019 in General Discussion

44 comments in this topic