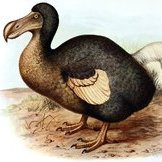 It's getting overkrauted here - German, UK based looking for a clan