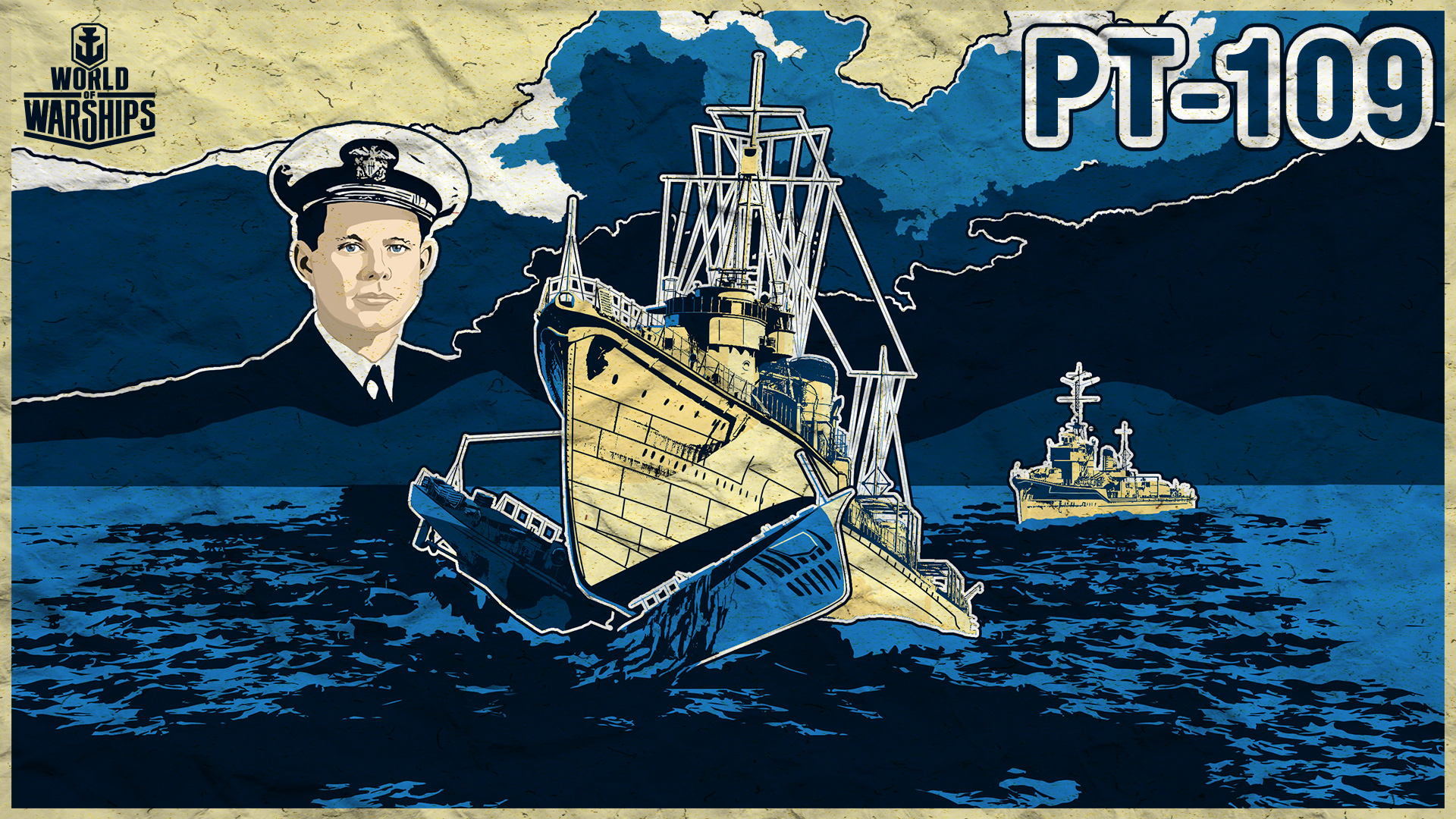 On August 1st, 1943, a strong force of PT boats was dispatched to the Blackett Strait to try and ambush Japanese destroyers bringing supplies to Kolombangara. After unsuccessful attack, only three boats were left on patrol.

At 2 at night, August 2nd, one of them, a PT-109, suddenly found itself in the path of destroyer Amagiri. Amagiri rammed and sunk her, leaving 11 survivors in the water.
The survivors swam to the nearby islands. Six days later, native scouts found them and, having delivered the boat's commander to an Australian coastwatcher (screatched in the coconut shell), a rescue operation was mounted.


Who was the commander of PT-109? None other than the son of former ambassador to the United Kingdom and a future president of the United States, John Fitzgerald Kennedy.

Pursuit of Goeben and Breslau

As the beginning of World War I caught the German battlecruiser Goeben and light cruiser Breslau far from friendly ports, their commander Konteradmiral Wilhelm Souchon was supposed to attack French troop convoys in the Mediterranean. After carrying out a bombardment of North African ports, his ships were ordered to seek shelter in Turkey.
While theoretically outgunned by the British fleet, admiral Souchon managed to avoid pursuit by a series of risky maneuvers and reached the safety of Dardanelles on August 10th, 1914. Based on the agreement between Germany and the Ottoman Empire, both ships were transfered to the Turkish Navy - along with their German crews and admiral Souchon was appointed Commander-in-Chief of the ottoman Navy on September 23rd, bringing the Ottoman Empire to war by his Black Sea raid against Russian targets on October 29th.


British ships shadowing the Goeben and Breslau before the beginning of hostilities.

This Day in History 6 Comments

This battle saw the first independent operation of US Destroyers in the Solomons while trying to interrupt the "Tokio Express" supply runs. Using the lessons from the previous night battles, Cdr. Moosbugger split his force into two divisions, planning to use DesDiv 12 as a hammer and DesDiv 15 as an anvil in a combined gun and torpedo ambush.

Thanks to the new SG radars, the American destroyers of DesDiv 12 were able to launch their torpedoes undetected and their salvo hit all four Japanese destroyers, crippling three of them right under the guns of DesDiv 15. The only Japanese destroyer to escape the ambush was Shigure, where torpedo hitting her punched straight through the rudder without detonating. Shigure was able to get away, adding to her commander, Tameichi Hara's, "Unsinkable" reputation.

Note: In the Order of Battle, intentionally displaying the detailed Japanese organization - by this stage of war, where US Navy preferred to deploy Destroyer Divisions together, IJN tended to mix and match ships and commanders who did not operate together before.

This night battle, first of the surface engagement in the Solomons chain, was the worst defeat the US Navy suffered in its history.

Reacting to the Allied landing on Guadalcanal, Admiral Mikawa put together all available surface forces - seven cruisers and a single destroyer - and led them in first of the raids down the "Slot" from Rabaul to Guadalcanal.

Thanks to the superior night trainign and equipment, along with serious tactical and communication errors on the Allied side, the Japanese force managed to utterly surprise and defeat two of the three Allied surface groups, heavily damaging cruisers USS Chicago and HMAS Canberra (had to be scuttled later) of the Southern patrol group and sinking trio of Astoria class heavy cruisers in the Northern group.


Due to the time it took to get his ships back in formation and damage suffered by sporadic return fire, he decided not to risk his ships by pressing the attack further and instead retreated to Rabaul, losing the cruiser Kako to submarine torpedo on August 10th just 70 miles short of Rabaul.
In total, with air and submarine attacks, the Japanese lost one heavy cruiser against four heavy cruisers and one destroyer being sunlk on the Allied side. Moreover the attack did lead to decision to withdhraw cargo ships from Guadalcanal, leaving the Marines ashore with limited supplies and equipment.


After losing three ships of Astoria class including the lead ship in one battle, the class was renamed after the second ship, USS New Orleans.

Battle of the Gulf of Riga

The Battle of the Gulf of Riga was one of the larger operations in the Baltic during WWI. Aiming to secure the Gulf and destroy the Russian units located there, it did lead to several encounters, however the goals were thwarted by strong resistance and minefields.

the last of the bombardments of Japan was truly international, with the American ships being joined not only by British, but also New Zealand warships. The target were again iron works around Kamaishi and the damage caused was more serious than i the first bombardment.

Another attack was planned for August 13th, but it was cancelled both due to technical trouble of HMS King George V and the dropping of nuclear bombs. No further bombardment took place until the end of the war.